The 6 Emotions to Embedded Consciousness

We live in a time when emotions are high because they’re publicly shared. And there is this underlying thinking that embedded consciousness which is the theory that states that intelligent behavior emerges from the interplay between brain, body, and world. And how it emerges is largely through emotion.

Yet, we’ve opened up “Pandora’s Box” filled with emotions, both positive and negative when it comes to human emotion, for all to see. Regardless of the sentiment of the emotion shared, sharing our feelings with each other builds connection, which equates to relationships.

But if our society is emotionally run, why do we still primarily rely on logic to get everything done?

Logic is the match stick that gives us a platform to strike up opinions and conversations which gives us creative input from the crowd.

It’s more rooted in fact and data, so perhaps as humans, it makes us feel safe, backing up what we share to appear more believable. Certainly, if it weren’t for research and data, we would live in one very opinionated society. 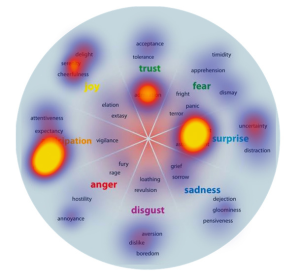 While there is no definitive list of the spectrum of emotions, one popular one, from emotion expert Paul Ekman, contains six: fear, anger, sadness, disgust, surprise, and joy. These six have been found in every society worldwide, and have been shown to be identifiable by people regardless of upbringing, culture, or experience.

All humans and businesses need to be aware of the following emotions they are evoking as it has a direct reflection on the emotional response they want to evoke. In fact, I would suggest mapping these emotions to your content plan. Here are the six emotional styles of sharing, applied to social:

Fear—The function of fear is to get us out of dangerous situations, or into them. I know many people who are simply not on social media because they see social as an intrusion and fear the repercussions of being social. I predict that this will change over time as millennials grow up with a new set of social barriers moving forward.

Anger—Anger is an emotional response related to one’s psychological interpretation of having been threatened. Some people are simply waiting on the sidelines to argue. Others take it farther, becoming “haters” or “trolls”. Anger is often one-sided unless it’s accepted by both parties, in which case it’s an endless quagmire of opinion-slinging, often only ending by out-fatiguing the other person.

Sadness—This is an emotional pain associated with, or characterized by, feelings of disadvantage, loss, despair, helplessness, and sorrow. As in our everyday lives, bad things happen to good people. These experiences are shared quite often and typically draw an amazing support system. There’s solace in sharing our vulnerabilities and pain, and this can be quite healing if not made a crutch or part of one’s social identity.

Disgust— Disgust is an emotional response of revulsion to something considered offensive or unpleasant. Social forms of disgust come in many flavors, oftentimes in the form of over-sharing or not thinking through who is reading your content. And others simply don’t care when they share, or who they may hurt in sharing. As are the many decisions in life, we can take part in these discussions, or just move on.

Joy—The function of joy is to indicate that we have done, or witnessed something, that is enhancing our wellbeing, and to encourage us and others to aspire to greatness in the future. It’s not an accident that Facebook built your profile as a timeline of your life, to share with others all your joyful experiences. It feels great to share joyous occasions and makes us feel good as humans to see others experiencing joy.

Surprise—The purpose of surprise is to indicate that something unexpected has occurred, to prepare us (and those around us) to deal with it. The element of surprise, when done right, can be a marketer’s best tactic. I’ll say it in one word: Apple.

It’s important that we also understand, as people running and representing brands, that when your emotional response resonates authentically, mirroring will most likely take place. The act of mirroring anyone’s body language is a way to bond and build understanding with other humans.

It is a powerful tool that we use instinctively without even being aware of it. The most obvious forms of mirroring are yawning and smiling. When you see someone yawn, or even if you just read the word “yawn”, you are likely to yawn immediately, or during the next 30 seconds.

This same concept has been proven to work online. An example of mirroring was reported by The A.V. Club, in January 2012 where Facebook adjusted its newsfeed algorithm for several hundred thousand users to see how what you see in your newsfeed affects your emotional state as part of a scientific study.

The resulting paper (click here for full paper), published in The Proceedings of the National Academy of Sciences (PNAS), found that people mirror the positive or negative emotions that their friends express in their posts—all without the aid of nonverbal cues like body language or tone of voice.

Creepy, right? But still, the results are interesting.

The researchers called this effect an “emotional contagion,” because they purported to show that our friends’ words on our Facebook news feed directly affected our own mood. More here: Facebook Alters Algorithm for Emotional Research.

On a personal note, I think it’s ironic that the very study that sought out to logically prove emotions affect human behavior in society actually caused more emotional reactions than that which is measured.