How to Escape an Evolving Social Echo Chamber

Warning: This post will briefly mention the ‘E’ word. Election.

One of the most pertinent themes to come out of the recent election is the role that social media plays in facilitating a personal echo chamber of thoughts, opinions and ideas. Echo chambers are getting a bit of a hard time at the moment, because let’s face it, the election shocked everyone.

Why did it shock people? What’s an echo chamber, is it something to do with the second Harry Potter book?

Well, an echo chamber is a space that surrounds us with similar attitudes to our own, which sort of sounds like a great concept, right? It does sound safe and accommodating, but it’ll only end up dumping you with the holy mother of surprises in the end…aka the election result.

Chances are that you hang around online and offline with people who share the same outlooks and ideas…usually that’s usually why people are drawn to each other and get on. 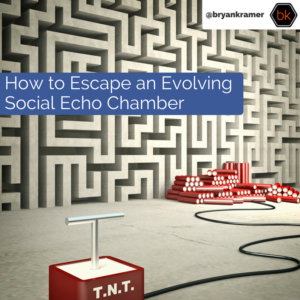 ly mostly saw stuff that you thought too and were like ‘yeah, this is what most people are thinking, I’m pretty sure I know how this is all gonna pan out’.

But hold the phone; everyone’s not thinking the same. We curate our online feeds, we’re the designers. We can blank out descending voices and promote and share content that complements our own ideals.

The ‘echo chamber’ isn’t a realistic cross-section of society, it’s a space that we’ve each, individually formulated.

And this has a big impact, especially when 76% of 18-34 year-olds are using Facebook more than they’re watching TV every month.

The thing is, echo chambers work for content that isn’t related to politics or the news.

It’s nice to see lots of videos of cute puppies if you’re into cute puppies…and social media is doing a good job when it shows you stuff you’re interested in. But when content is more serious and politically, socially and economically important, how can you burst the echo chamber bubble?

Facebook has to answer serious questions about its responsibilities, whether it wants those responsibilities or not. Zuckerberg recently claimed it was crazy to suggest Facebook has a role to play in big events like elections and that most people make their decisions based on ‘lived experiences’. The thing is that part of people’s lived experience is on social media now.

We essentially live in small, snug pockets of space online, so if our social media feeds are echo chambers…this becomes part of our lived experience.

So, the first thing you can try is adjusting your Facebook Feed. You can tweak your News Feed preferences, to give you a more well-rounded collection of news and information sources, instead of news sites that consolidate what you think already. Minimizing your contact with opposing views doesn’t help you to understand other people or the other side of the story.

Now, we all know there is lots of fake, sensationalized news sources out there and you don’t have to start following what they say…for your own sanity’s sake if anything.

Pew estimated that 44% of Americans get their news from Facebook, so it’s essential that you’re reading credible research. Reading and listening to intelligent, prestige media from the other side is recommended – whether that’s conservative, liberal, socialist, libertarian or something else…it’s up to you.

And the same goes for anything else, aside from politics. For example, reading about contrasting perspectives and impacts on different sectors when business announcements are made.

In truth, Facebook has to do more to let people expose themselves to opposing ideas and reach more meaningful consensus. James Shamsi believes that if Facebook can “give an option to turn off algorithmic content distribution for anything related to politics” then this would help people to escape a loop of their own opinions.

The same logic applies to Twitter feeds. We’re all guilty of collating a collection of voices that we find funny, agree with or view as authentic and our timeline becomes a utopia for our own belief-system.

When times are good it can be great, but in times of trouble, we desperately need to make sense of things and that should mean putting your head above the parapet and gaining understanding through dialogue and engagement.

Start following credible figures and sources that hold opposing viewpoints. If they use research and empirical evidence to back up their claims then their positions will only strengthen your own balanced knowledge on a subject.

Reducing opposing points of view because you think they have a lack of information about a subject is often unrealistic and patronizing.

One of the best things you can do to burst the echo chamber bubble is to be aware that you’re in one. As long as you know that there are opposing views and you read from credible sources that challenge your views then it can only urge you to back up your own claims with more evidence. Critically assessing everything you read before you agree or accept it is crucial. Scrutinize what you read.

[Tweet “Critically assessing everything you read before you agree or accept it is crucial. Scrutinize what you read via @bryankramer”]

The emphasis with echo chambers is on our online activity, but our offline dealings are just as important.

We are more connected than ever before, but that doesn’t mean that we’re unified. Making an effort to work and speak with more diverse groups of people and network outside of your comfort zone can help to positively shape your world view.

Schools, universities, and workplaces are all places with a cross-section of society and everyone has a responsibility to reach out and be open to everyone. It can be far easier to understand people’s opinions, ideas, and standpoints when you’re in front of them having a conversation, instead of exchanging through a 140 character tweet.

It might feel tough and difficult, but try not to think in binary terms. People are complex and far more than just ‘pro’ or ‘anti’ or ‘for’ or ‘against’. There are always commonalities that unite us and engaging with people through friendly dialogue and debate can help us to understand each other with more clarity.

Think and view social media with a critical lens because it’s not the whole story, only part of it; be more open to new ideas and it’ll help you to build a better and bigger picture.