Choosing You with Lynn Smith @LynnSmithTV

Learn how Lynn made one choice that completely transformed her career and personal life, and in doing so found her joy.

“There is only one you.” – .@LynnSmithTV

“What is it that’s so different about you?” – .@LynnSmithTV

“Your impact is only as great as your story.” — .@LynnSmithTV 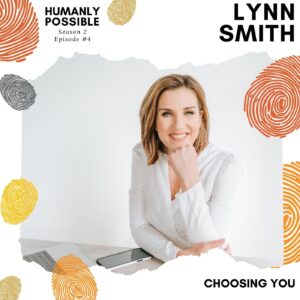 Starting as an executive assistant in Hollywood, Lynn Smith used to cut out articles from the NY Post that might make a compelling Law and Order episode. Storytelling has always been a passion but it became a reality when she made the move East to become a Producer at the TODAY show, then an on-air contributor for todayshow.com. That inspired a leap from behind the camera to in front of the camera as an anchor and reporter in Hartford, Philadelphia, and New York City in the number 1 local market in the country. She moved to National News as the anchor of Early TODAY on NBC and First Look on MSNBC. A move South brought her to CNN Headline News and the home where she’d meet her incredible husband Graham, and later welcome 2 beautiful boys, Ryder and Lochlan.

Lynn is now taking her 20 years of experience in journalism and storytelling to experts, entrepreneurs and corporations to help develop and deliver impactful content through her company Rylan Media.