Be a Better Human with @Tim_Ash

“Happiness isn’t something you chase.” – @Tim_Ash 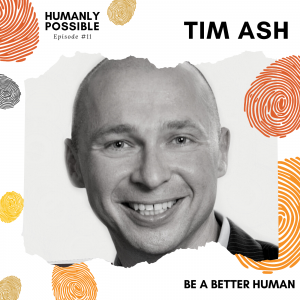 Psychology, marketing, and persuasion expert. Keynote speaker, bestselling author, and the former CEO of a leading marketing agency. Tim Ash is an acknowledged authority on evolutionary psychology and digital marketing.

He is a sought-after international keynote speaker, and the bestselling author of Unleash Your Primal Brain and Landing Page Optimization (with over 50,000 copies sold worldwide, and translated into six languages).

Science from U.C. San Diego while studying on a U.C. Regents Scholarship (the highest academic award of the U.C. system). He stayed on at U.C. San Diego for Ph.D. studies focused on machine learning and artificial intelligence. Although Tim never defended his dissertation, he advanced to candidacy and also earned his Master’s degree in Computer Science along the way.

Originally born in Russia, Tim has been a long-time resident of San Diego, where he lives with his wife and two children within walking distance of the Pacific Ocean. Tim was a conference-winning collegiate sabre fencer and Athlete of the Month at U.C. San Diego and is a certified Tai Chi Chuan martial arts instructor. He is a poet, painter, and an avid photographer specializing in travel and fine-art figurative work.