The Little Things with Vern Smith

In this intimate interview, Bryan’s father-in-law Vern shares incredible stories of what he calls “the little things” that happened throughout his years that contributed to him living a life he never could have imagined..

“I’m eternally grateful for the example set by my parents,” –Vern Smith

“All of those experiences built on themselves… you do one thing that gives you confidence to do another.” –Vern Smith

“That moment changed my life… 20 some years later, I was Medicaid director for the state of Michigan.” –Vern Smith

“It was the most fortuitous thing that could possibly have happened in terms of my career.” –Vern Smith

“When you’re in a position at that level, the most important job qualification you can have is the trust of the people that you’re working for.” –Vern Smith

“What made it enjoyable was that you knew you’re making a difference on something that was really important to people.” –Vern Smith

“I think states are the laboratories of innovation, and there’s no place where that’s more true than in state Medicaid programs.” –Vern Smith

“There was a little plaque in his office, and it said, ‘live your life for something that will outlive you’.” –Vern Smith

“If I hadn’t met her [Paula], if things hadn’t worked out in this particular way, just think how my whole world would have been different.” –Vern Smith

Vern Smith is a nationally lauded expert in Medicaid, Medicare, state budgets, and trends in the healthcare marketplace. He has authored numerous reports on current issues in Medicaid and state strategies for containing health care costs and improving quality. 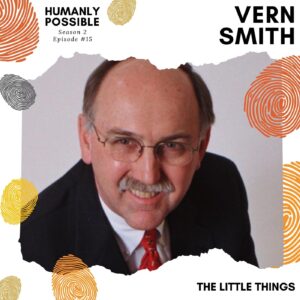 He has been a guest on National Public Radio and is an often-quoted public health policy expert for The New York Times, The Washington Post, The Wall Street Journal, Newsweek, and USA Today.

Vern had a distinguished 30-year public service career, serving as Michigan Medicaid director and as budget director for the human services agency. He was a managing principal at Health Management Associates, and now holds the title of Senior Advisor Emeritus at HMA.

Vern earned a Ph.D. in economics from Michigan State University. He serves on the board of trustees of Anderson University, his undergraduate alma mater.

Listen to That Voice with Benedict Hadley @benedict_hadley

by Bryan Kramer
We use cookies on our website to give you the most relevant experience by remembering your preferences and repeat visits. By clicking “Accept All”, you consent to the use of ALL the cookies. However, you may visit "Cookie Settings" to provide a controlled consent.
Cookie SettingsAccept All
Manage consent